art in the square

A few months ago, Esther Didden wandered through the historic centre of Utrecht. At that moment, Centraal Museum was closed due to the corona measures, but on the adjacent square stood a huge angry tree.

A QR code next to the work informed me further: it was a work of art by Anne de Vries (1977) entitled Save the world. With this sculpture De Vries wants to question the assumption that technology means progress. The tree is made of plastic and draws a mean grimace. An upright side branch looks like a reprimanding finger.

At home I looked for more information. I found out that this work by Anne de Vries is the third artwork on the square next to the Centraal Museum and that works of art are changed on a regular basis. Earlier David Jablonowski made a work for outside: a collage of 3D printed prototypes of furniture pieces and boulders as a future vision for the furniture industry. This outdoor work paid homage to the exhibition that was currently on view indoors. The next outdoor work was Kevin by Sarah Lucas: a gigantic bronze zucchini. It became a hit on Instagram and enticed many a selfie. 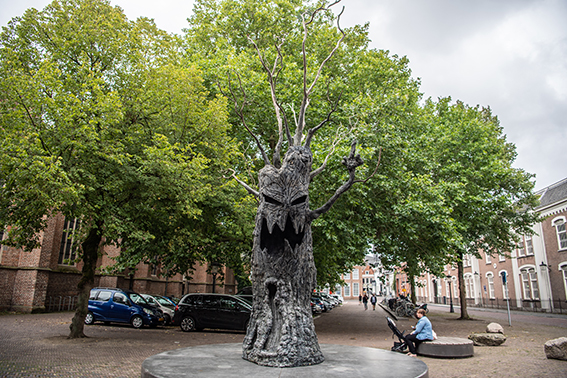 Art on the square is a great concept that allows the museum to step outside its walls. Artistic director Bart Rutten was happy to tell me more about it. Centraal Museum is the oldest municipal museum in the Netherlands. In 1838, Centraal Museum's predecessor, the Municipal Museum of Antiquities, opened its doors in what was then the City Hall. Residents of fourteen years and older were allowed to visit the museum for a quarter. In 1891, the museum moved to Buitengoed Hoogeland and after thirty years moved to the Agnietenklooster. The collection of the city was then merged with various (private) collections and housed in one 'central' museum. Hence the name Centraal Museum. A century later, the museum is still located there.

The history of the Centraal Museum is important because it is housed in a building with protected city status. The former monastery is beautiful, impressive and breathes history. Because of this, the management is bound by strict rules when it comes to alterations to the building. Despite this, they know how to interweave the history of the building with modern art, as is clearly visible in the courtyard garden. Take a walk around, Couzijn van Leeuwen (1959-2019) made beautiful ceramic wall plaques for the walls of the museum adjacent to the museum garden.

But not everyone walks into the beautiful museum garden. Can the museum promote itself via the adjoining square with its thousands of daily passers-by? That was the question that the brand new artistic director Bart Rutten was faced with four years ago. The organisation had been asking for some time, but there was no plan, although a budget had been set aside. Rutten explains that ideas immediately came to him when the question of art on the square was put to him, but that he decided at the time to get to know the museum first.

He soon realized that the character of the museum, with its broad and diverse programming, did not allow for an uncompromising image. It had to become a changing stage, inspired by The Fourth Plinth in London. On the basis of the exhibition programme and the museum's own collection, an artist is either commissioned to create a work for the square or a specific work of art is taken on loan.

Then there is bound to come a moment when someone says, I know whose work should be on the square.

When I speak to Bart Rutten, the work of Anne de Vries has made way for the work Seeds of Change: A Ballast Flora Garden by the Brazilian artist Maria Thereza Alves (1961). Ballast is a term from seafaring, meaning 'worthless' cargo.
In the old days, earth, sand and stones were loaded as ballast. Because of the extra weight the ship was deeper and could sail more stable. After arriving in the harbour, the ballast was dumped. Seeds of plants that were hidden in the ballast would bloom again on the spot. Alves investigated the places where the ballast was dumped in various harbour cities. She then charted the flora and was able to see the routes the ships had taken centuries earlier in the landscape.
The Portuguese colonisation of her native Brazil often plays an important role in her work, and her ballast gardens symbolise uprooting and are a reminder of the historical (forced) migration of people and plants. It is the most charged artwork on the square so far, says Rutten. The work is related to the exhibition The Botanical Revolution which has been on display at the museum since September 10th.

The work of art that will appear on the square after Alves' work is already known: a work by Persijn Broersen and Marit Lukács. Rutten is not looking any further, because that would not fit in with the concept of the square. art in the square fit. He and the museum curators are constantly talking to artists, seeing exhibitions and visiting studios. Experiences are exchanged in an ongoing conversation. Then there is bound to come a moment when someone says, I know who should have a work on the square.

Art on the square
The Fourth Plint 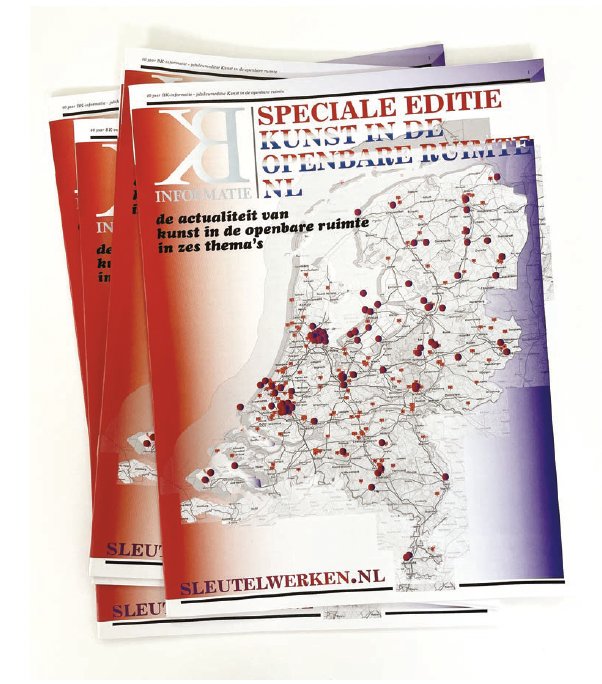 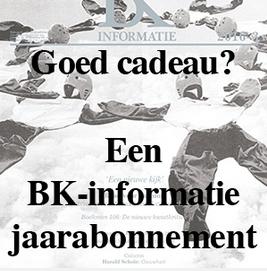